Sorry, but this article is only available to Rolling Stone magazine subscribers at the moment. Below is a copy of it. 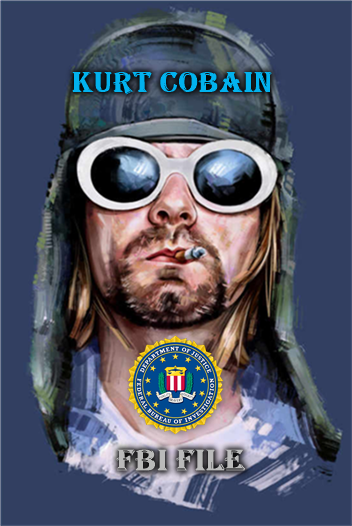 In the past month, Kurt Cobain and Nirvana have snuck back into the headlines. April 5th marked the 27th anniversary of Cobain’s death, an NFT of Cobain’s last photo shoot was put on the market, and Nirvana as a group were hit with a copyright-infringement lawsuit for alleged unauthorized use of a 1949 illustration on their merch. As announced this week, six strands of Cobain’s hair, cut in 1989, will be part of a rock-memorabilia auction. And now comes Cobain’s FBI file.

Periodically, the Federal Bureau of Investigation makes public some of its archives on politicians, entertainers, and other boldface names. And quietly last month — for reasons the Bureau has not commented on — the FBI plucked out its file on Cobain and made it available for the first time, shortly after it had done the same with paperwork on late mob boss Vito Genovese.

A mere 10 pages, the file is slim but intriguing. The centerpieces are two letters, sent from names that have been redacted, urging the Bureau to investigate Cobain’s 1994 death as a murder, rather than suicide. “Millions of fans around the world would like to see the inconsistencies surrounding his death cleared up once and for all,” reads one, typed-out, from September 2003. That letter also cites director Nick Broomfield’s Kurt & Courtney doc as an example of similar skepticism.


The other letter, also from a blocked author but written by hand, dates from 2007. “The police who took up the case were never very serious in investigating it as a murder but from the beginning insisted on it being a suicide,” it reads in part. “This bothers me the most because his killer is still out there. …” The writer also cites so-called evidence (“there were no prints on the gun he supposedly shot himself with”) and claims that, in Cobain’s note, “he mentioned nothing about wanting to die except for the part of it that was in another handwriting and appeared to be added at the end.”

The FBI’s responses to the letters, sent from different officials at the Bureau but nearly identical in wording, are also contained in the file. “We appreciate your concern that Mr. Cobain may have been the victim of a homicide,” each reads. “However, most homicide investigations generally fall within the jurisdiction of state or local authorities.” The replies go on to say that “specific facts” about “a violation of federal law” would have to be presented for the Bureau to pursue, but based on these letters, “we are unable to identify any violation of federal law within the investigative jurisdiction of the FBI.” With that, the Bureau said it would be passing on pursuing any investigation.


Also part of the file is a similar response to a letter sent to then–Attorney General Janet Reno in 2000, although in that case, the correspondence that triggered the response is not included.

Even stranger, the released pages also include portions of a January 1997 fax sent to the Los Angeles and D.C. offices of the FBI (as well as to several NBC executives) from Cosgrove/Meurer Productions, the Los Angeles documentary company that’s home to the long-running Unsolved Mysteries series. Those released pages include a one-paragraph summation of theories about the case involving “Tom Grant, a Los Angeles-based private investigator and former L.A. County Sheriff’s deputy,” and his suspicions that the suicide ruling was “a rush to judgment.” The fact sheet claims that Grant “has found a number of inconsistencies, including questions about the alleged suicide note,” which Grant believed was “a retirement letter to Cobain’s fans.”

CMP co-founder Terry Meurer doesn’t recall much about the original request, but Unsolved Mysteries did ultimately air an episode addressing these theories that same year. “We reach out to the FBI for various stories and try to get information on them,” says Meurer. “We still do that — we were just talking to the FBI yesterday about a request. We’re in constant contact with them. So that was a typical communication.”

As of press time, the FBI did not respond to a Rolling Stone query about the timing of the publication. But with the release of the file, Cobain joins a curious list of musicians who have been the subject of FBI surveillance or investigations. They include the Notorious B.I.G. (the Bureau’s files include more than 300 pages on his murder, although the case was closed in 2005), the Monkees (for anti-American “subliminal messages” incorporated into their Sixties concerts by way of video footage), Robin Gibb of the Bee Gees (“a potentially threatening” telegram supposedly signed by that brother Gibb, sent to the law firm representing his then-wife in their divorce proceedings), and John Denver (for supposed death threats made against him in 1979).

The Cobain file may not be as salacious, but it’s a reminder that the FBI’s interest in collecting files on musicians didn’t stop during the classic-rock era: The Man had his alternative side, too.

Piątek o 13:44
ImranMagic
I
I
Biggest Mistakes To Reduce Your Followers On Twitter

J
Virtual Museums and Art Galleries Around the World