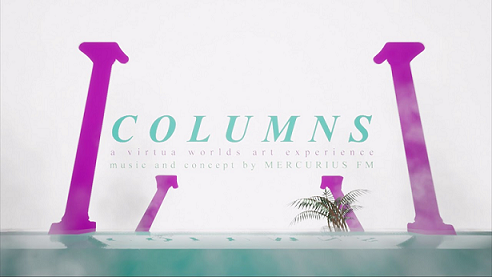 COLUMNS is a vaporwave VR art experience based on Mercurius FM's remix of the song CLOTHO from the classic SEGA puzzle game, COLUMNS. It is a free VR experience which is playable on Windows PCs with and without VR. The vaportrap style remix is also available on all digital music stores and streaming services including Apple Music, Spotify, Bandcamp, and more.

Features:
- Tech Demo and Beta version. (It's also free!)
- Columns can be played with or without VR. The VR mode includes 2 different control schemes, First Person Free Movement and First Person Teleportation for a more comfortable experience.
- There is a day night cycle as well as a lunar cycle.
- There are 2 photography/camera modes, a regular screenshot and a selfie mode.
- The player has control of screen filter effects Dithering, Glitch, Pulse, CRT TV, Sci-Fi, 8 Bit, and Cross-Stitch.
- The player can also control the lighting colour.
- These filters and colours can be used to create vaporwave art with screenshots.
- MP3 file of music by Mercurius FM included in the game directory.
- Screenshots will be saved in the following location:
User/AppData/Local/VirtuaParadise/Saved/Screenshots

Controls:
- Columns can be played with a game controller, mouse and keyboard, Oculus Touch Controllers, and the Oculus remote.
- A diagram with the control scheme is included in this folder as well as inside the game. See included file "Control Scheme.jpg".

Known Issues:
- The character body is not able to be seen in VR modes
- VR Screenshots are in Stereo
- Performance optimizations needed for low spec machines

WARNING:
Only Tested with Oculus VR and Touch Hardware, but should work with others
Only tested with Windows 7


Zaloguj lub Zarejestruj się aby zobaczyć!
I love music that plays in the rhytm of my heart
J