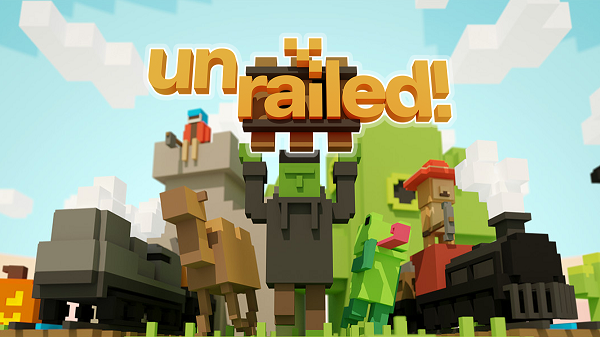 BUILD A TRACK FURTHER THAN EVER BEFORE!
Unrailed! is a chaotic online and couch co-op multiplayer railroad construction game where you work together with your friends as a team to build a train track across endless procedurally generated worlds. Master encounters with its inhabitants, upgrade your train and keep it from derailing!

Gather resources and craft tracks to extend your railroad to prevent your train from reaching the end. But watch out - there is only one tool of each type. Co-operation and co-ordination of your team is essential to survive this increasingly challenging journey!

PLOUGH YOUR WAY THROUGH THE WORLD
Every world is unique! You and your team will have to master ever new challenges to stay on track!

ATTACH NEW WAGONS TO MASTER THE UNKNOWN
Upgrade your train to be prepared for whatever is about to come. Get an atomic engine, upgrade your crafting wagon, attach a supercharger or choose from a vast range of other options.

PLAY WITH OR AGAINST YOUR FRIENDS!
Play cooperatively with up to four players in a single team or challenge the co-op skills of your friends in a two versus two game.

“Unrailed! is essential to absolutely anyone who loves arcade couch co-op games, and I will undoubtedly be playing this for years to come. All that’s left now is for you to grab a friend and go. How long can you hang on?” - COGconnected by Haley Perry

“Unrailed! is an ingenious indie that really shines when you play it with a friend so hop aboard and see where this train takes you.” - Video Chums - by A.J. Maciejewski

“Unrailed is simple, charming, and absorbing. The gameplay is addicting, and it is exponentially more fun as you add friends to your game. It’s the best party game since, or possibly surpassing, Overcooked. A true hidden gem.” - Gaming Trend byTimothy McVicar